The City of Half Moon Bay is a proud recipient of five prestigious financial awards from the California Society of Municipal Finance Officers (CSMFO) and Government Finance Officers Association of the United States and Canada (GFOA) as further described below.

These awards represent a significant accomplishment by staff in implementing the highest standards and best practices in municipal budgeting and financial reporting and setting an example to other agencies. Staff is always committed to continue working on improving the quality of financial documents.

Financial awards can be found within the Annual Budgets.

California Society of Municipal Finance Officers (CSMFO) is California’s premier statewide association that promotes excellence in financial management through innovation, continuing education and the professional development of its’ members. The City of Half Moon Bay has been receiving the CSMFO Budget Excellence Award for the Operating Budget for five consecutive years. In FY 2016-17 staff made a significant effort to redesign the budget process and presentation, including the City’s Capital Improvement Program. The CIP Budget is now presented in a separate document and for the last two years the City also received the Budget Excellence Award for its Capital Budget. The CSMFO Budget Awards Program is designed to recognize those agencies that have prepared a budget document that meets the highest criteria and standards applied to municipal budgeting.

The Government Finance Officers Association of the United States and Canada (GFOA) is a national association that represents public finance officials throughout the United States and Canada with the mission of promoting excellence in state and local government financial management. The GFOA established the Distinguished Budget Presentation Awards Program in 1984 to encourage and assist state and local governments to prepare budget documents of the very highest quality that reflect both the guidelines established by the National Advisory Council on State and Local Budgeting and the GFOA's best practices on budgeting and then to recognize individual governments that succeed in achieving that goal. The City of Half Moon Bay received the first GFOA Award for the FY 2016-17 and another one for the FY 2017-18 budget documents. This is the only national award program in municipal budgeting and receiving it means that the City satisfied the highest principles and nationally recognized guidelines to produce informative and transparent budget document.

Additionally, the City was featured in January 2018 Edition of the CSMFO Magazine for being one of three public entities that received the highest score from CSMFO for effective use of graphics, artwork and charts. Click here to read more. 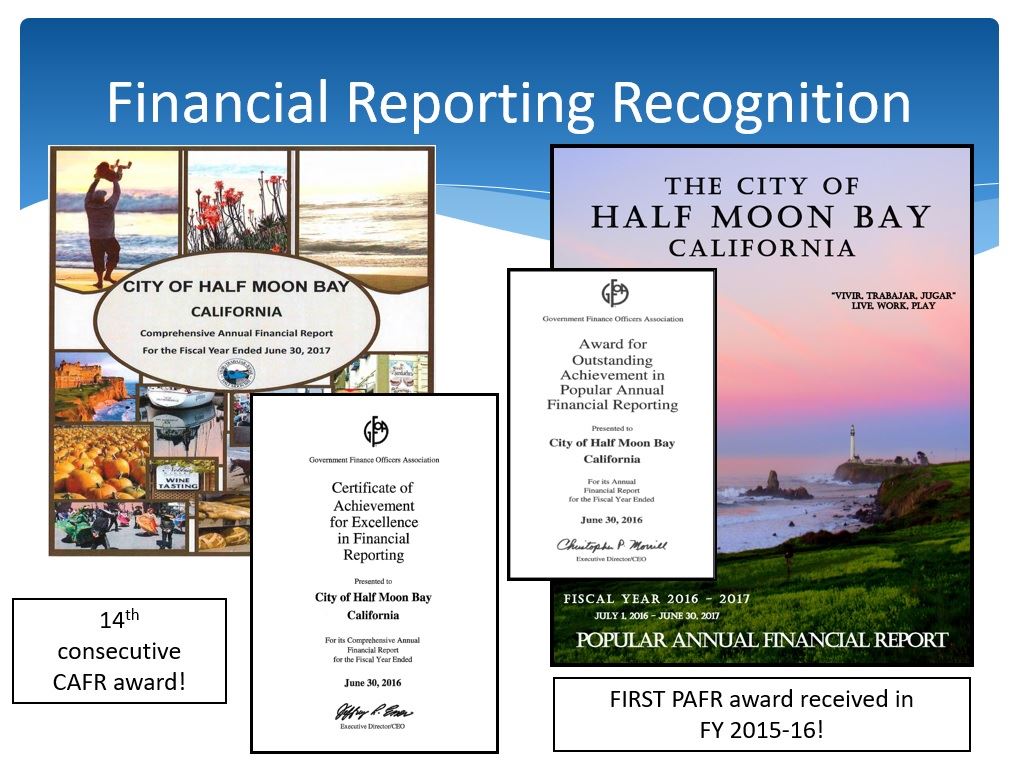 CERTIFICATE OF ACHIEVEMENT FOR EXCELLENCE IN FINANCIAL REPORTING

For the last 14 consecutive years The GFOA awarded a Certificate of Achievement for Excellence in Financial Reporting to the City of Half Moon Bay for Comprehensive Annual Financial Report (CAFR). This award is the highest form of recognition in governmental accounting and financial reporting.

The Popular Annual Financial Report is designed to be a summary of the Comprehensive Annual Financial Report (CAFR) that is easier and more enjoyable to read by general public. The City prepared and published the FY 2015-16 report for the first time in 2017 and received the award recognition from GFOA for Outstanding Achievement in Popular Annual Financial Reporting for the fiscal year ended in June 30, 2016. The City of Half Moon Bay happened to be one of 41 California municipal agencies that received this award that year and the first and only (!) city in San Mateo County. Staff previously prepared this report on an annual basis and has received another award from the GFOA for the FY 2016-17 PAFR report.